EFCC Vs Ex-GMD of NNPC: $8.9m found in my house was Gift, says Yakubu

EFCC Vs Ex-GMD of NNPC: $8.9m found in my house was Gift, says Yakubu 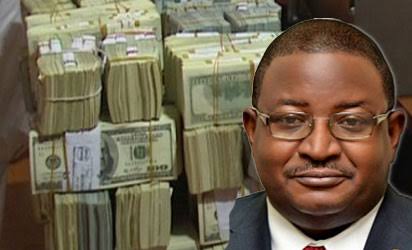 The trial of erstwhile Group Managing Director (GMD) of the Nigerian National Petroleum Corporation (NNPC), Mr Andrew Yakubu had a new twist after Yakubu claimed that 98 per cent of the $9,772,800 and $74,000 cash recovered from a safe in his house in Kaduna state are gifts from his well-wishers, while two per cent of the recovered cash is from his savings from the estacode he received while he was GMD.

The Ex-GMD of NNPC is standing trial for alleged money laundering offences levelled against him by the anti-graft agency, Economic and Financial Crimes Commission (EFCC) in a six-count charge, which he was arraigned on March 16, 2017.

The charges against Yakubu by EFCC, included failure to make full disclosure of assets, money laundering and intent to avoid a lawful transaction under law, receiving cash without going through a financial institution, hiding the aggregate sum of $9,772,800 and £74,000 in a house.

EFCC said the money was recovered by its agents from a safe allegedly hidden by the defendant in a house belonging to him, in Kaduna State.

Justice Mohammed had in May 2019, partially upheld Mister Yakubu’s no-case submission by striking out two out of the six counts.

The Court of Appeal, Abuja, on the 24th of April 2020 partially upheld Mister Yakubu’s appeal by striking out another two counts ordering him to return to the trial court to enter his defence in relation to the remaining two counts.

Both Yakubu and the EFCC have since appealed the decision at the Supreme Court.