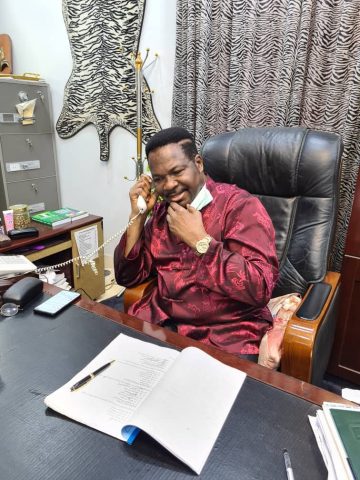 Chief Mike Ozekhome, Senior Advocate of Nigeria and constitutional rights lawyer has stated that his appearance before Justice Ayo Salami panel was not for damage assessment, or to pull people down but to share his vision and views with the panel on how to re-build the EFCC and other security agencies, to become strong national institutions, instead of throwing up strong men and strong women as we have so far seen.

Ozekhome made this assertion in a press statement during the week.

Ozekhome had appeared on invitation to Justice Ayo Salami panel on Tuesday, 28th July, 2020, over its investigation of the EFCC in the last five years. Mr Ibrahim Magu was also present with his lawyer, Mr Wahab Shittu.

Ozekhome said he had participated in the last 3 major National Conferences in Nigeria to help re-engineer the weak structure of the Nigerian nation. These, he said, were the 2005 National Political Reform Conference, midwifed by the President Olusegun Obansanjo government; the Vision 2020, convoked by late President Umaru Yar’Adua; and, the 2014 National Conference, convened by President Goodluck Ebele Johnathan.

He also noted that he had appeared before the Salami panel based on its invitation in a letter, dated 22nd July, 2020.

To this end, Ozekhome recalled that he had brought along with him, several files and concrete video evidence, to show how he had, over the years, advised on how to kill the corruption monster.

He said the evidence also includes the urgency of re-structuring the EFFC, with over 30 recommendations as to how the EFCC could be better reformed and restructured to meet the expectations of Nigerians who are suffering under the terrible yoke of corruption.

Ozekhome testified that the EFCC of today, just as it has been since it was set up by the EFCC (Establishment) Act, 2004, has been about strong men and strong women, with each successive Chairman or Acting Chairman trying to outdo himself and others before him, in carrying out the bidding of the government in power, no matter how detestable, and thus play to the gallery.

He therefore craved the panel’s indulgence to allow him mention Ibrahim Magu time and time again, because Magu fully epitomised the EFCC; and thus, you cannot differentiate Magu from the EFCC and the EFCC from Magu.

He said this is because EFCC did not represent a strong institution, independent of Magu, its Acting Chairman. Consequently, serial breaches by the EFCC under Magu are equally that of Magu himself. Ozekhome said whenever you ask the EFCC prosecutors or operatives why they were doing the wrong thing, they would tell you emphatically that “our Oga, Magu, told us to do so”.

Chief Ozekhome emphasised that he does not believe in corruption and that when he met with the current president, Muhammadu Buhari (at that time, he was still campaigning as APC candidate) and Professor Sagay, SAN, the Chairman of PACAC, at a Police workshop, where told them that “we must kill corruption before corruption kills us, because corruption has become the 37th state of Nigeria and the wealthiest and most powerful”.

Ozekhome testified that he has, however, always added a caveat: “We must fight corruption within the parameters and legal regime of our constitutional democracy, by respecting citizens’ fundamental rights, observing the rule of law and obeying court orders, even if unpalatable to the EFCC”.

Ozekhome stated that he had personally interacted with Mr Ibrahim Magu, both in his old office in June, 2016 (or 2017), when he went to ask for the administrative bail of his client, one Alhaji Abdulhamid Zari, who had been in their detention and custody for over one week; and also publicly in August, 2017.

He said he made this friendly rapprochement rather than going to court to seek bail as he could easily have done and had always done, so as to show that we could fight corruption without enlisting enmity and rancour.

He said Mr Magu promised him that he should tell his client (Zari) to report to EFCC and that no one would further detain him, since he (Ozekhome) had personally come himself to ask for Zari’s administrative bail.

Rather than this promise being fulfilled, Ozekhome said his client, with his junior lawyer, reported to the EFCC as promised, and his client was promptly clamped into detention again, where he spent the next 8 days in their custody or dungeon (as people call it); until Ozekhome went to court to seek bail and secure his client’s release.

Upon serving them the EFCC the court processes (bail application), the EFCC hurriedly released him the next day. Meanwhile, the EFCC had also gone to the house and factory of this same client, to mark it with their normal red label and paint (“EFCC Zone: Keep off”).

The court granted this order, but EFCC refused to obey the court order, as it was their passtime, until much later when it became convenient for them, in a most arbitrary manner.

Ozekhome testified that the second time he interacted with Mr Magu, this time publicly, was in August, 2017, when Mr Magu himself, most kindly invited him to the EFCC’s Training Centre at Karu, Abuja, where he said he spoke directly to Magu and the audience, saying that corruption should not be fought selectively, by allowing perceived corrupt people in government to go scot-free.

Ozekhome testified that he had earlier written a letter to the Vice President, who was then the Acting President of Nigeria, on 31st May, 2017, where he asked him 12 questions concerning recovered loots. He said the letter was delivered at Aso Villa on 1st June, 2017.

He said he then challenged Magu that he should just put one person in government in the dock, so that Nigerians would believe he is genuinely fighting corruption.

Ozekhome said this was because what was happening was that when a member of the opposition party decamped to the ruling APC party, all the sins of that member are forgiven, like Namaan the leper, who dipped himself into River Jordan 7 times and was cleansed of his leprosy. He said the anti-corruption war should not be a battle of “we” versus “them”, as it is almost a norm that all the members of the ruling party were deemed to be uncorrupt and incorruptible, while all the members of the opposition parties, rights activists, critics, lawyers defending accused persons, were all deemed corrupt.

Ozekhome further went ahead to speak to the letter he wrote to Yemi Osibanjo, with a view to making the contents known to the public, by including it in a series of his writes-up. He tendered to the panel the CDs of the very meeting (workshop) containing his advice to Magu.

Ozekhome said from Magu’s demeanour, he did not appear angry with him. He said in all fairness to Magu, some overzealous EFCC operatives did not want him (Ozekhome) to speak on that occasion, believing that he would simply abuse Magu, the EFCC and the government; but Magu pushed for Ozekhome to speak, stating that Ozekhome had come to help the EFCC.

The EFCC originally wanted him to speak for 2 minutes only, but upon seeing his wonderful performance, the audience cheered him on and asked him to continue, thereby rendering his speech to last for around 7-10 minutes, instead of the initial 2 minutes. He testified that Comrade Adams Oshiomole was the Chairman at the occasion.

Ozekhome also testified that before this incident, and as far back as June, 2016, during the M. K. O. Abiola and Kudirat Abiola’s remeberance day at Chief Abiola house in Ikeja, Lagos (when the government was barely 1 year in office), he had peered into the future, like Nostradamus (the man who saw tomorrow), to tell the government why many Nigerians were not buying into the anti-corruption fight.

He tendered a CD containing his advice to the government and also tendered another CD titled “Why DSS, EFCC and Buhari’s anti-corruption war is failing”. He said he made it clear in these exhibits, how to fight and win the anti-corruption fight. Ozekhome said he had also encountered Magu in December, 2017, during Justice Auta’s valedictory service as Chief Judge of the Federal High Court.

Ozekhome also spoke against the EFCC’s acts and passtime of leaking sensitive and private information concerning suspects still undergoing interrogation and investigation, to their preferred media outlets, The Nation Newspaper and Sahara Reporters.

These media outlets would immediately publish a blow-by-blow account of the encounter between the FECC operatives and that suspect, who for now is still; presumed innocent. The panel was adjourned for the Sallah break, to give Ozekhome more and adequate time to make further presentations at a date to be communicated to all parties involved.