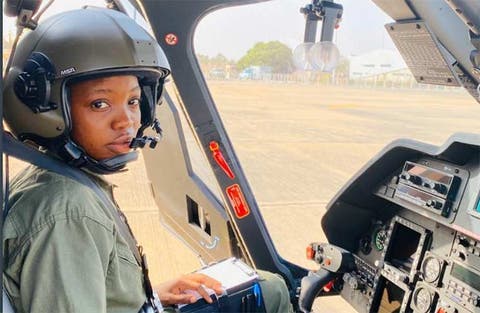 The Nigerian Air Force has said it will hand over the driver and two other occupants of the Kia Sorento SUV which killed Nigeria’s first female combat pilot, Flying Officer Tolulope Arotile hi, to the police for investigation and prosecution.

The PUNCH learnt that after investigations, the culpable person among the suspects would face manslaughter charges.

Disclosing the details of the preliminary investigation to journalists at the NAF Headquarters in Abuja on Sunday, the Director of Public Relations and Information, Nigerian Air Force, Air Comm. Ibikunle Daramola, said the service would work with the police to prefer appropriate charges against the culpable persons among the vehicle occupants.

Arotile, 24, was knocked down by the suspects at the NAF base in Kaduna last Tuesday.

Following Arotile’s death, her family, groups including the Yoruba socio-political group, Afenifere, had called for an investigation into her death.

Afenifere, which spoke through its spokesman, rejected the freak accident, which the Air Force said caused her death.

But on Sunday, the Air Force gave more insights into the accident.   It said the driver, Adejoh was reversing the Kia Sorento SUV when it hit Arotile who fell and hit her head on the tarmac. The car also ran over parts of her body after knocking her down.

The Squadron Pilot at the 405 Helicopter Combat Training Group, Enugu, subsequently died from loss of blood and trauma to the head at the 461 NAF Hospital, Kaduna.

One of our correspondents learnt that the culpable person among occupants of the car might face manslaughter charges and on conviction, is liable to seven years’ imprisonment, according to Section 28 of the Road Traffic Law which provides that where reckless and dangerous driving has caused the death of a person, the accused person shall be guilty of an offence and is liable on conviction to imprisonment of seven years.

Daramola said the late pilot, who was attached to the Air Component of Operation Gama Aiki in Minna, Niger State, had just completed her promotion examination and was in Kaduna awaiting deployment for her next assignment.

According to him, she was staying with her sister, Mrs Damilola Adegboye, at the Sabo area in Kaduna and visiting the NAF Base whenever necessary.

Narrating the sequence of events that culminated in Arotile’s death, Daramola explained that on the fateful day, at about 10.55am, the late Flying Officer received a phone call from her colleague, Flying Officer Perry Karimo, a fellow helicopter pilot from the 405 HCTG, who wanted to discuss arrangements for their return to Enugu.

He reportedly asked her to come to the base  so they could work out the modalities, adding that Arotile at 10.58am placed a call to the Group Operations Officer of 405 HCTG, Squadron Leader Diepiriye Batubo, who was in Minna at the time, to clarify issues regarding her deployment.

The NAF spokesman noted that the call from Karimo and the one to Batubo both took place before 11.00am, over five hours before the incident which led to her death.

He stated, “Flying Officer Arotile was later conveyed from Sabo to the NAF Base Kaduna by her sister, Mrs Adegboye, where the deceased dropped her phone for charging at a house in the Instructor Pilots’ Quarters belonging to Squadron Leader Alfa Ekele.

“Her elder sister later dropped her off  (sic) at the Base Mammy Market at about 4.00pm, where she proceeded to photocopy and laminate some documents. It was while she was returning from the Mammy Market at about 4.30pm that three of her former schoolmates at the Air Force Secondary School, Kaduna; Mr Nehemiah Adejoh, Mr Igbekele Folorunsho and Mr Festus Gbayegun, drove past her in a Kia Sorento SUV, with registration Number AZ 478 MKA.

“It is noteworthy that Adejoh, Folorunsho and Gbayegun are all civilians who live outside NAF Base Kaduna, but were on their way to visit one Mrs Chioma Ugwu, wife of Squadron Leader Chukwuemeka Ugwu, who lives at Ekagbo Quarters on the Base.”

Upon recognising Arotile after passing her, Daramola disclosed that Adejoh reversed the vehicle, ostensibly in an attempt to quickly meet up with the deceased, who was walking in the opposite direction.

“In the process, the vehicle struck Flying Officer Arotile from the rear, knocking her down with significant force and causing her to hit her head on the pavement. The vehicle then ran over parts of her body as it veered off the road beyond the kerb and onto the pavement, causing her further injuries.

“Flying Officer Arotile was subsequently rushed to the 461 NAF Hospital Kaduna for treatment, while Mr Folorunsho (one of the occupants of the vehicle) who is also an Accident & Emergency Nurse at the St Gerard Catholic Hospital Kaduna, administered First Aid. Arotile was confirmed dead by the On-Call doctor at the 461 NAF Hospital at about 4.45pm on 14 July 2020, as a result of the head injuries,” the NAF spokesman disclosed.

After the incident, Daramola said the driver and the two occupants of the car were immediately detained at the Air Provost Wing, 453 Base Services Group Kaduna as investigations began.

He also said they were subjected to toxicology tests at the 461 NAF Hospital but no traces of alcohol or psychotropic substances were found in their systems, noting, however, that Adejo did not have a valid driving licence.

Daramola further said, “Traffic Officers from the Kawo Police Station and the Kaduna State Police Command as well as road traffic experts from the Federal Road Safety Corps were also called in to provide support during the investigation.

“Having carefully considered the foregoing, the preliminary investigation concluded that the death of Flying Officer Arotile was caused by blunt force trauma to the head and significant bleeding resulting from being struck by the vehicle.”

“Being a civil case, the matter will be handed over to the Nigeria Police with a view to further investigating and charging the suspects to court in accordance with extant laws.”

Meanwhile, the NAF has requested the expertise of the FRSC in the investigation into Arotile’s death. It asked the corps to authorise “the release of its road traffic accident investigative experts in analysing and interpreting the accident.”

In a letter addressed to the Sector Commander, FRSC, Kaduna dated July 17, 2020, and signed by an investigator, Flying Officer, M. Isah, the NAF said the corps’ expertise was needed to assist the HQ 057 Provost Investigation Group, Ikeja, to investigate the circumstances that led to Arotile’s death “in order to ascertain the actual cause of death.”

After the NAF spokesman revealed his identity on Sunday, many Nigerians besieged Adejoh’s Facebook page and queried his motive.

While some cursed him, others sympathised with him, saying the action might not be deliberate.

Meanwhile, a Senior Advocate of Nigeria, Mr Ebun-Olu Adegboruwa, has said the remains of  Arotile ought not to be buried until the conclusion of investigations in the circumstances surrounding her death.

The Nigerian Air Force had announced that the 24-year-old would be buried on July 23.

But Adegboruwa advised against the burial, in a statement on Sunday, titled, “Nigerians Deserve Proper Investigation into the Death of Arotile before Burial.”

The lawyer said given “the inconsistent stories emerging from the Nigerian Air Force” on the cause of Arotile’s death, there was a need for a coroner’s inquest.

Adegboruwa said, “The least we expect is a proper investigation, followed with a coroner’s inquest, including an independent autopsy report.

“There is no point in rushing to bury her in light of emerging revelations.”