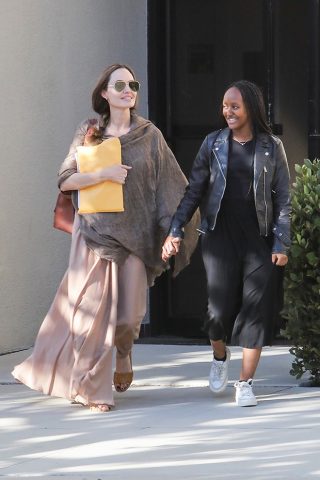 From the moment, her heart said, go for adoption, she has never pretended about it. She has continously demonstrated her affection, commitment and unflinching desire to give them her all.

Angelina Jolie had a life, her adopted kids had their lives, now, they all have a life together.

In a recent interview, the A- list actress described how her 15 year old daughter, Zahara, whom she adopted from Ethiopia in 2006 has not only influenced her life but has also opened new frontiers of knowledge in the Black Lives Matter movement.

The actress and humanitarian, who is also a contributing editor for Time magazine, sat down for a virtual conversation with Ugandan climate activist Vanessa Nakate this week for a conversation about activism and the climate crisis.

The discussion turned to the Black Lives Matter movement, which now may be the largest movement in U.S. history.

One of the things that’s also been interesting is the education,” Jolie said. “I don’t know about the schools in Uganda, but I know in the United States there’s a very big question particularly about the—my daughter is from Ethiopia, one of my children. And I have learned so much from her.

‘She is my family, but she is an extraordinary African woman and her connection to her country, her continent, is very—it’s her own and it’s something I only stand back in awe of. But what I see in, for example, American history books and how limited they are, they don’t — they really start teaching people who are Black about their lives through the Civil Rights movement, which is such a horrible place to begin.”

“I think what people really need to first understand is that Africa is not just a country,” Nakate responded. “It’s actually a continent with 54 countries.

I remember the history that we learnt about [in school], and it talked so much of slavery and all that. I think that that is a narrative that needs to change.”

In an interview with Harper’s Bazaar UK last month, Jolie discussed racism in America, telling the magazine, “There are more than 70 million people who have had to flee their homes worldwide because of war and persecution — and there is racism and discrimination in America.

A system that protects me but might not protect my daughter — or any other man, woman or child in our country based on skin color — is intolerable.”

What Angelina said about Zara